Signa A. Daum Shanks, who was born and raised in Saskatchewan, joined Osgoode’s full-time faculty on July 1, 2014 from the University of Saskatchewan College of Law where she had been an Assistant Professor since 2009 and had taught Torts, Law and Economics, Aboriginal Self-government, Canadian Legal History, and the Kawaskimhon Aboriginal Rights Moot. At Osgoode, she teaches Torts, Law and Economics, Game Theory and the Law (via Monash University Law School), Indigenous Peoples and Canadian Law, and Comparative Indigenous Legal Traditions.

She has taught at the summer program hosted at the Indigenous Law Centre in Saskatoon. Professor Daum Shanks was Osgoode’s inaugural Director of Indigenous Outreach from 2014 to 2018.

Prior to working in law schools, Professor Daum Shanks was on the faculty at the University of Alberta’s School of Native Studies and had regularly taught at the University of Saskatchewan’s Department of Indigenous Studies and First Nations University of Canada. She also previously worked with Ontario’s Office of the Attorney General (Criminal Appeals Division), Indigenous and Northern Affairs Canada (formerly DIAND), the federal Department of Justice, and the Toronto office of a national law firm.

She has her PhD in History from Western, and while completing it was awarded a SSHRC Doctoral Fellowship. She also has a BA (Hons) from the University of Saskatchewan, an MA from Western, an LLB from Osgoode in 1999, and an LLM from the University of Toronto. As well, Professor Daum Shanks has studied at the école de langue française et de culture québécoise at L’université du Québec à Chicoutimi. While completing graduate work in history, she also passed translation training in French and studied the eighteenth century legal system in New France. For her training in law, Professor Daum Shanks articled at Saskatchewan Justice and clerked at the Land Claims Court of South Africa via her participation in Osgoode’s Intensive Program in Aboriginal Lands, Resources and Governments.

Active within the legal profession, Professor Daum Shanks has presented to the Law Society of Ontario’s Continuing Professional Development program on Indigenous Legal Issues. In addition, she regularly participates in programs organized via Osgoode’s Professional Development division. Professor Daum Shanks is an elected member of the Ontario Bar Association’s Provincial Council. She is also the elected Toronto representative on the OBA’s Board of Directors for 2020-2021, after acting as a Member-at-Large and on the executive of the OBA’s Women Lawyers’ Forum. Internationally, the United Nations has appointed Professor Daum Shanks to be a participant in the UN’s annual Permanent Forum on Indigenous Issues. At York University, she is also actively involved in the Indigenization of learning processes. For that work, Professor Daum Shanks is a recipient of an Initiatives in the Classroom Grant for her efforts at introducing Indigenous methods and content to various circles within York’s greater community.

Her writing projects include topics about Indigenous Peoples and the legal profession, Indigenous slavery in Canada, the existence of Métis treaties, microhistory, competing s.35 Aboriginal claims, the role of Indigenous history as evidence, and the future of Indigenous Peoples’ influence upon sustainable development. In 2017, she was a Visiting Scholar at the University of Saskatchewan and her article Why Coywolf Goes to Court was awarded the Scholarly Paper Award by the Canadian Association of Law Teachers. York’s Office of the President has also awarded her the 2017 Research Leader Award. She is also the organizer of Project Fact(a) , a think tank of legal researchers from across Canada analyzing various topics that have caught international attention during the 2018 R. v. Stanley trial.

In 2020, she was given the University of Saskatchewan’s Alumni of Influence Award from USask’s College of Arts and Science. As well, the Women’s Law Association of Ontario presented her with the 2020 President’s Award, which recognizes a woman who has made a substantial contribution to the legal community as an academic, adjudicator, litigator, solicitor, or author, and has demonstrated a commitment to the promotion of women in the law and is recognized as a leader amongst her legal peers. As of 2020 she is also an appointed Senior Fellow at Massey College. 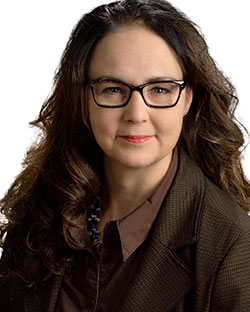