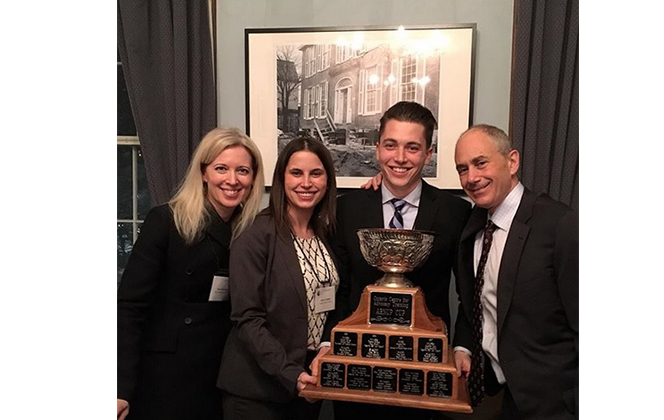 Pictured, from left, are Sonia L. Bjorkquist, President of the Advocates’ Society, Arnup Cup winners Julia Cecchetto and Nicholas Hay, and one of their three coaches, Justice Robert Goldstein. Missing from the photo are coaches, Justice Moiz Rahman and Nancy Dennison.

The Arnup Cup bears the name of the Honourable John D. Arnup, O.C., Q.C., who for many years sat as a distinguished member of the Court of Appeal for Ontario following a career as one of Canada’s finest litigation counsel.

First held in 1988, the Arnup Cup has increased in prominence over the years. Teams from each of Ontario’s law schools participate in trials held in a Toronto courtroom and presided over by judges of the Superior Court of Justice. Senior members of the Advocates’ Society act as assessors. The teams vie for the right to represent the province in the prestigious Sopinka Cup, Canada’s national trial advocacy competition, held annually in Ottawa.