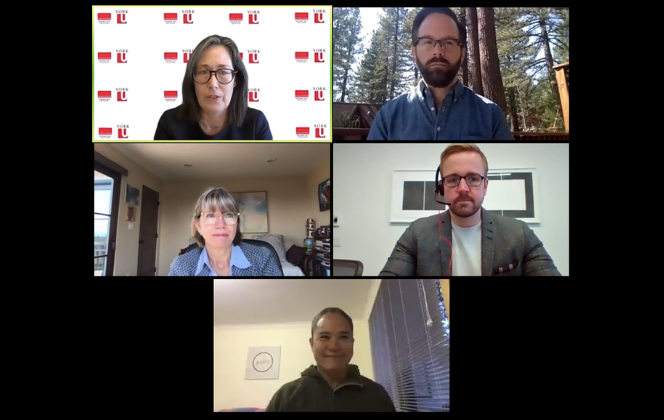 It was the first time in the history of the annual lecture — named after a 1954 Osgoode graduate and one of Canada’s finest counsel who died in 1989 — that it had been delivered as a two-part virtual event.

Fisk pre-recorded her lecture, which is posted on YouTube and Soundcloud. That was followed on Oct. 6 with a live virtual one-hour panel discussion via Zoom webinar with her and three panelists: Professor Joo-Cheong Tham of Melbourne Law School; Joshua Mandryk, an Associate with Goldblatt Partners LLP; and, McGill University Assistant Professor Barry Eidlin who is a comparative historical sociologist.

“We were delighted to be able to pilot a new way to deliver our Pierre Genest annual lecture,” said Sara Slinn, Associate Professor and Associate Dean (Research and Institutional Relations) at Osgoode. “It meant that we could reach a much wider audience.  There is a large labour law academy in North America and beyond which holds Professor Fisk’s scholarship in high esteem.  It’s great that we could bring them and other interested people around the world together digitally for her lecture.”

Fisk’s talk, entitled “Protection by Law, Repression by Law: Bringing Labour Back Into Law and Social Movement Studies,” is based on a forthcoming article in the Emory Law Journal that she co-authored with Diana Reddy, a lawyer and PhD student at UC Berkeley in jurisprudence and social policy.

“This paper is all about what will happen if we think of labour as a social movement now in the United States, and indeed in earlier decades in the last century,” Fisk said.