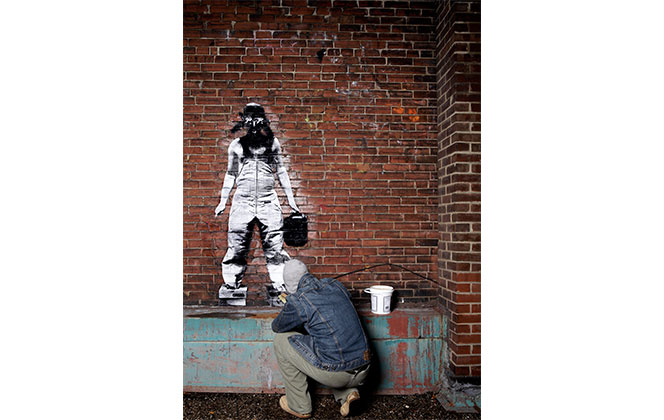 Dan Bergeron (pictured in self-portrait) is a Toronto-based visual artist whose work takes the form of large-scale portraits adhered to architectural elements, functional sculptures, billboard interventions or mixed-media paintings. Blending Street Art aesthetics and a deep engagement with communities, Bergeron’s work employs urban visual culture’s immediacy to foster reflection upon issues of personal identity, social relationships and the spaces that we collectively inhabit. To that end, each project is highly site-specific: the shape and texture of a wall, the history and human uses of a location, or an individual’s connection to a place dictate its content, placement, and form. While the majority of Bergeron’s work is exhibited publicly, he also maintains a studio practice that forms the basis of his public art and gallery exhibitions.

Bergeron’s interest in creating public art stems from his experiences skateboarding and his early exposure to graffiti culture. Growing up skateboarding, Bergeron learned to see the city as a place of possibilities and playful interaction. Stairs, banks, handrails, ledges, curbs, cracks in the sidewalk and almost any surface that his board could navigate became the building blocks for fun and creativity. This view of the city, combined with his early introduction to graffiti through friends who practiced it, inspired Bergeron to create work that interacted with the urban environment. As he was interested in photography and portraiture specifically, Bergeron decided to take a different path and create work that focused on issues of representation and identity.

Over the course of his career, Bergeron has completed commissions for the Art Gallery of Ontario and MOCCA, he has been a featured artist for the Contact Photography Festival in concert with the Royal Ontario Museum and has been a featured artist as well as the artist in residence for the Luminato Festival. Bergeron has created installation works and projects for commercial clients such as Vespa, Red Bull, Nike and Adidas. He has received grants from the Toronto, Ontario and Canada Arts Councils and was awarded the prestigious Chalmers Fellowship from the OAC in 2012. In 2015, Bergeron completed his first permanent public art project, Faces of Regent Park, which was commissioned by the City Of Toronto and is now working on his second permanent public art project in Richmond, British Columbia.

While in residence at Osgoode, Bergeron plans to engage students in a project that will culminate in the creation of a series of publicly displayed portraits depicting black citizens who have been carded by Toronto Police. This project will raise questions around the biased application of law, the legal and human rights of individuals, and how the law shapes access to and safety in our public spaces. This project will provide an opportunity for students to explore the legal issues inherent to Street Art.

Osgoode’s Artist in Residence program brings together artistic creativity with the exploration of justice and the law. Under this innovative program, the Law School will annually bring in an artist, from any artistic discipline, to work on projects focused on interpreting legal history, examining law’s realities today, and imagining law’s future, whether in Canada or elsewhere in the world.