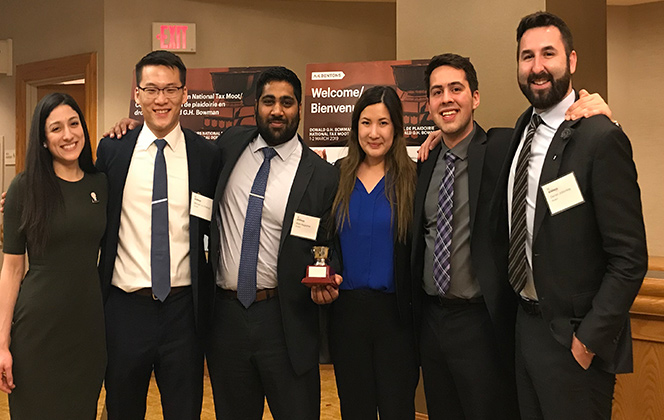 A total of 32 teams participated in the Donald G. H. Bowman National Tax Moot on March 1 and 2, 2019, representing law schools from across the country. Only four teams could advance to the semi-finals. Incredibly, Osgoode’s appellant and respondent teams both advanced, setting up for a potential Osgoode-Osgoode showdown in the finals.

“The Osgoode mooting team, consisting of Keenan Fast, Darren Joblonkay, Michael Liu, Rishi Nageshar and Renee Van, made us all so extremely proud,” said Thang Trieu, Partner, Tax Litigation & Dispute Resolution, KPMG Law LLP, who was one of the coaches.

“It was truly exceptional for Osgoode to have two teams represented in the semi-finals. Unfortunately, neither of our teams advanced to the finals. Nevertheless, it was a very dominant performance by our teams, and they represented Osgoode admirably. In addition, team member, Rishi Nageshar, took home the award for Best Advocate!”

Trieu also gratefully acknowledged “the significant contributions” made by Osgoode Professor Scott Wilkie and Trish Lahoud of KPMG Law  toward the team’s success. “They have taken time from their busy schedules to attend regular sessions and to provide ongoing feedback and support since the beginning of November. I want to also thank Professor Jinyan Li for her valuable contributions. It was all truly a team effort.”