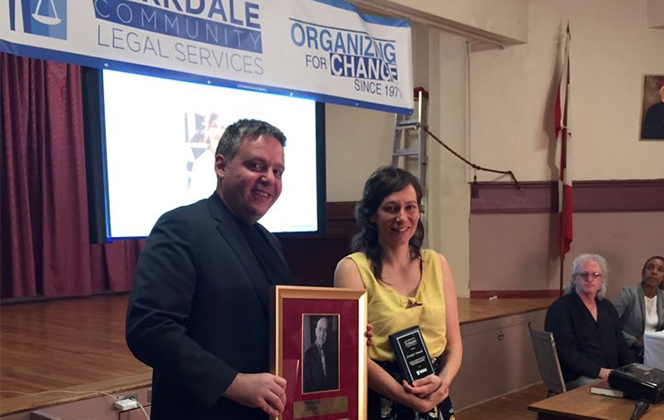 The Frederick H. Zemans Prize in Poverty Law is awarded annually to an outstanding student in the Intensive Program in Poverty Law at Parkdale Community Legal Services who has performed at a high level of excellence in all aspects of the Program. The prize has been established by the friends and family of Professor Frederick H. Zemans, Director of Clinical Education at Osgoode and founding Director of the Parkdale Community Legal Services in Toronto.

Jen Danch was awarded the Zemans Prize at the PCLS Annual General Meeting on June 28. Jen was recognized as a strong and dedicated student who understood and subscribed to Parkdale Community Legal Services’ vision and mandate. She showed a keen interest in developing and engaging in initiatives that challenge the systemic poverty, violence and other oppressive forces affecting PCLS clients. She identified many systemic issues that became apparent through her casework, her interactions with her clients and with members of the community. In all her work, she took care care to engage meaningfully with vulnerable and marginalized members of the community – and she insisted that such community members must have voice and agency in decisions that impact them.