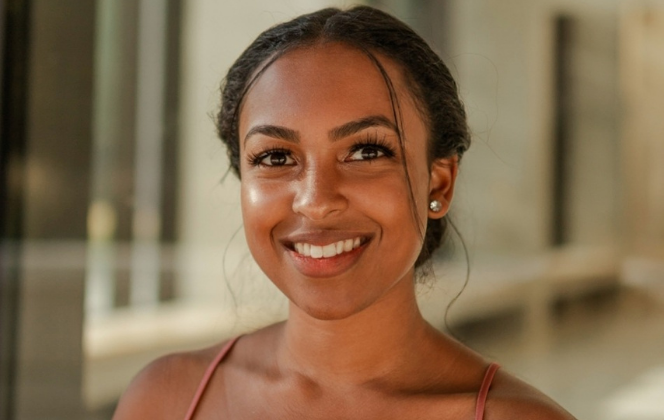 Scotiabank commits more than $500,000 over five years to support students pursuing a law career that could help change the legal system

Growing up in a multicultural diaspora household in Toronto and seeing the struggles and obstacles faced by her parents over the years, Bunisha Samuels is keen to confront the challenges facing racialized communities in Canada. Samuels’s mother is Tamil and immigrated to Canada in the 1980s during the Sri Lanka Civil War and her father is second-generation Canadian of Jamaican descent.

“My parents placed a huge emphasis on education. For me, it was a way to engage in community work and create accessible and informed spaces,” Samuels says. She knew early on that she wanted to pursue an education in law and advocate for diversity and inclusion in all society, and specifically in the legal system.

That pursuit just got a little easier for Samuels. The first-year student at York University, Osgoode Hall Law School in Toronto is one of the first recipients of a scholarship that is part of a new Scotiabank Program for Law Students, which will see the Bank commit more than $500,000 over five years. Six faculties of law across Canada will award scholarships on behalf of Scotiabank to fund students interested in pursuing a career in the legal profession with a goal to support and advocate for anti-racism in law.

“The past year marked a turning point in the struggle to end systemic racism and discrimination, as a global movement demanded greater accountability within the public and private sectors,” says Sandra Odendahl, Vice President of Social Impact and Sustainability at Scotiabank. “Scotiabank is supporting future leaders who will advocate for public policy and social change in the courtrooms and boardrooms of tomorrow.”

Samuels appreciates that this scholarship is one that offers support for getting more underrepresented students into the legal sector, while putting her experiences in community building at the forefront.

While doing her undergrad at Queen’s University in Political Science & Global Development, Samuels began advocating for black and Indigenous communities and other communities of colour to be brought into the conversations on much-needed policy and service changes within mental health and wellness support, sexual/interpersonal violence services, accountability for on-campus hate crimes, and the development of safe community spaces, among others. “Often, we speak for these communities, rather than with them,” she says.

Last year, she was selected to lead the inaugural Black Youth Fellowship, a program that allows students to work in different areas of the political system within Toronto City Hall and will launch this year. As part of her work, she helped mobilize a COVID-19 Rebuild Team to focus on amending policies and infrastructure to better support marginalized and racialized communities disproportionately impacted by the pandemic.

Baneet Hans, a first-year student in the University of Victoria Faculty of Law, also says the scholarship will increase the likelihood she will achieve her ultimate goal. “The only way we’re going to move forward with anti-racist work is to put yourself in spaces that weren’t made for you — spaces that are historically white — and receiving the scholarship will allow me to follow this path without having the pressure to repay loans,” she says.

Hans’s parents immigrated to Surrey, B.C., in 1994 from Punjab in India, and she and her parents have experienced racism, but her career decision was cemented when the white officer who shot and killed Michael Brown in Ferguson, Mo., was not indicted.

“After that, I really started paying attention to the ways in which the criminal justice system can further victimize already marginalized groups.” In Canada, one of the larger issues that needs addressing is the inequity in conviction rates of Indigenous people, Hans notes.

Recipients will have the opportunity to participate in an annual Day on Bay St symposium, which will enable them to meet with Scotiabank executives, members of the legal community and anti-racism community groups. Select participants in the scholarship program will be offered an internship opportunity at either Scotiabank, a law firm or another legal advocacy organization seeking to eliminate racism and discrimination in the legal sector.

“We’re pleased Scotiabank is going beyond the rhetoric. There’s a lot of talk about these issues but not everyone actually comes forward and supports them in a concrete, material way to make change happen,” says Professor Richard Devlin, acting Dean at the Schulich School of Law.

“It’s great that the private sector is recognizing that education and the diversification of education is so important for the future of Canada. We know that groups that are more diversified ultimately make better decisions because they’re more inclusive, responsive, nimble and open in their thinking.”