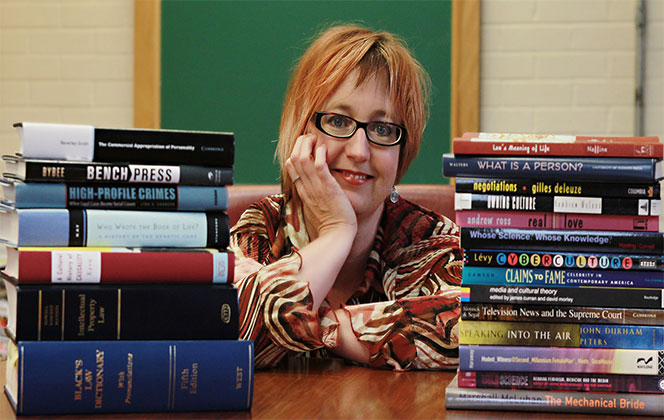 In an historical moment where we are repeatedly told by both purveyors of health information and popular culture alike that our hands are dirty and in need of constant cleansing (lest we infect ourselves and others), what happens to common forms of hand-to-hand touch that have long held legal consequence? In this talk, Sheryl Hamilton locates the end-of-game handshake in team sports and the greeting/parting handshake in business etiquette within a broader social context of the troubling of touch within pandemic culture. The handshake is productively theorized she posit, as simultaneously: an embodied ritual, a form of intimate touch, and a legal gesture. She frames the handshake, not only as a complex, quotidian legal ritual, but also as an increasingly volatile mode of handwork in contemporary life. Not surprisingly, in both business and sports the handshake has recently garnered formal and informal regulatory attention. Embodied alternatives are often posed, including fist bumps and touch through the second skin of clothing, among others. Yet, the representation, circulation, and contestation of these other ways of touching highlight an ongoing clash of values between a normative, haptic-legal order and the current cultural imperative to hygiene.
—-
Sheryl N. Hamilton is a Canada Research Professor at Carleton University appointed to the School of Journalism and Communication and the Department of Law and Legal Studies. She is the author of: Impersonations: Troubling the Person in Law and Culture (2009, University of Toronto Press); Law’s Expression: Communication, Law and Media in Canada (2009, LexisNexis); and Becoming Biosubjects: Bodies. Systems. Technologies. with N. Gerlach, R. Sullivan and P. Walton (2011, University of Toronto Press). Hamilton is the co-editor of the collection, Sensing Law, forthcoming from Routledge (Glass House) in November 2016 and is the Director of the Canadian Initiative in Law, Culture and Humanities. She held a Tier II Canada Research Chair in Communication, Law and Governance at Carleton for a decade and was inducted as a Fellow of the inaugural College of New Scholars, Artists and Scientists of the Royal Society of Canada in 2014. Hamilton is currently part of a Social Sciences and Humanities Research Council of Canada funded team exploring law and the senses. Her work takes up the ways that hands as media of contagion are constituted and reconstituted as objects of regulation in pandemic culture, exploring three key sites of “handwork”: hand washing, handshakes and self-inoculation.

All are invited to attend. Lunch will be provided.
Kindly RSVP: www.osgoode.yorku.ca/research/rsvp