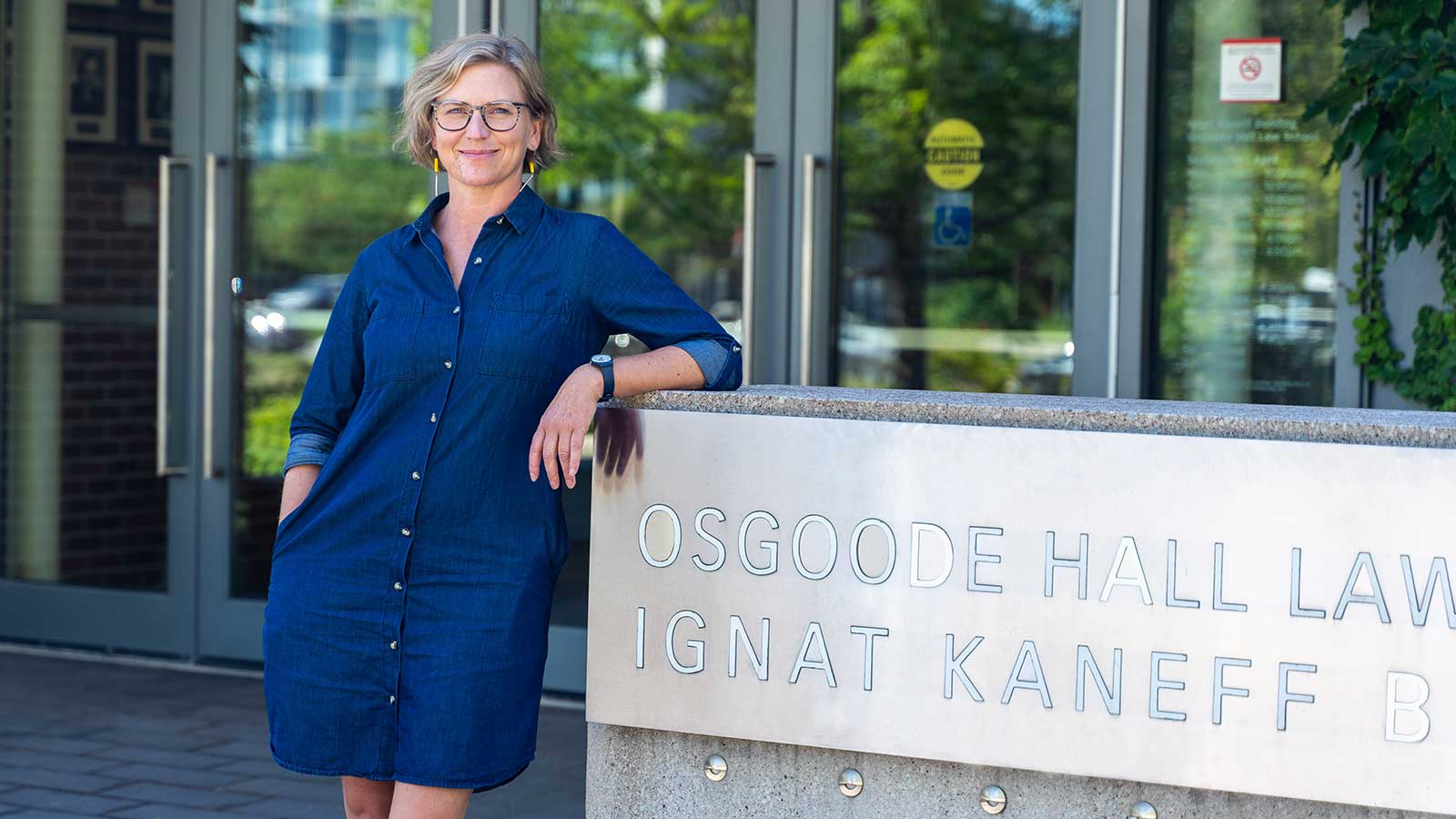 Osgoode Hall Law School Associate Professor Dayna Scott is chronicling a small Indigenous community’s existential battle to protect its culture, land and resources in the face of an overwhelming push to mine minerals for electric vehicles from deep below the ecologically sensitive peatlands of Ontario’s far north.

Scott, who has visited Neskantaga First Nation numerous times over the past seven years, discussed her book project during one of Osgoode’s ongoing Faculty Research Series events on Oct. 25. Performing what is known as community-based participatory research (CBPR), she said she has observed many interactions between Neskantaga leaders, politicians and mining companies and aims to document the shifting dynamics through successive chapters.

Faculty members, research fellows and students at the hybrid event peppered her with questions and offered suggestions on how to approach the project.

Neskantaga First Nation is one of several First Nations most profoundly impacted by the Ring of Fire, a massive, proposed nickel mining development in the mineral-rich James Bay Lowlands of Northern Ontario. The area is also believed to hold vast deposits of chromite, copper and platinum. But the wetlands are a massive carbon store that have been referred to as “the world’s lungs.” The project would include the construction of an estimated $1.6 billion, 450-kilometre, all-season road through First Nations territory, including boreal forest and muskeg.

“Various governments have hitched their hopes to the Ring of Fire as a potential driver of Ontario’s economy,” said Scott, who also holds the York Research Chair in Environmental Law & Justice in the Green Economy. “But it’s clear now that however green the gloss, major mineral proposals will have to deal with Indigenous governing authorities.

“The struggle for jurisdiction,” she told her audience, “is a high-stakes struggle.”

The recent passage of U.S. President Joe Biden’s Inflation Reduction Act of 2022, which promises to invest $369 billion U.S. in energy security and climate change programs over the next 10 years, could ratchet up the pressure to develop the Ring of Fire even more.

Neskantaga First Nation has taken Ontario to court looking for “ground rules” on how the province should consult and accommodate Indigenous communities that are in a state of crisis. Among other challenges, the First Nation has been rocked by numerous suicides and has been under a drinking water advisory since 1995.

During the Q&A session, Osgoode Associate Professor Saptarishi Bandopadhyay asked if the Ring of Fire resources could be considered “conflict minerals,” akin to those mined in countries like the Democratic Republic of the Congo (DRC), which have been used to fund civil conflicts.

“I don’t think it’s my call,” said Scott. “If the people of Neskantaga want to call them that, I’ll back them up.”

But Scott pointed out that mining hasn’t yet begun in the Ring of Fire. And while there is certainly the potential for conflict and serious environmental justice questions, including risks of sexual violence against Indigenous women and girls that often accompanies roads and work-camps in remote areas, the kinds of human rights abuses taking place in the DRC, such as child labour, are not present in this situation.

As a researcher, Scott said she feels some tension at times between scholarship and activism. “But I do believe,” she added, “that good scholarship starts with genuine questions.”

Scott’s book aligns closely with one of her key research initiatives, titled Jurisdiction Back: Infrastructure Beyond Extractivism, for which she serves as co-principal investigator with Professor Heidi Kiiwetinepinesiik Stark of the University of Victoria’s Centre for Indigenous Research and Community-led Engagement (CIRCLE).

That project brings together 14 academics and land defenders from across the country, including the Yellowhead Institute and the University of Toronto, to investigate how a “just transition” to sustainable economies can be achieved while restoring Indigenous jurisdiction, laws and governance systems. Earlier this year, it was awarded a $2.5 million Partnership Grant from the Social Sciences and Humanities Research Council of Canada.