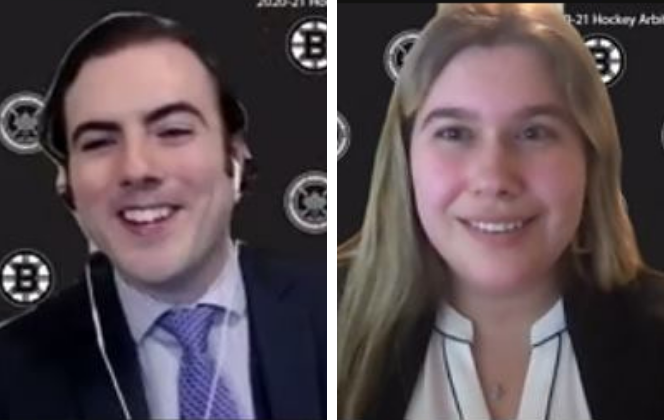 Osgoode teams placed first and second out of a field of 26 teams from Canada and the United States in the annual Hockey Arbitration Competition of Canada, held March 13 and hosted by the University of Toronto.

The Osgoode team members – all executive members of the Osgoode Entertainment & Sports Law Association – were Jordan Kazan Baigrie and Jeremy Wright (the Champions, who are pictured) along with Nolan Cattell and Vaughan Rawes (Semi-Finalists).  The “HACC,” as it is more commonly known, was founded in 2012 by U of T, and has grown with each passing year.

Cattell provided the following brief breakdown of the competition:

“Each team is asked to prepare written submissions for three simulated salary arbitration hearings based on the performance of National Hockey League (NHL) players who were eligible for arbitration during the previous off-season.

Teams are assigned to represent either the Player or Club side and must submit a formal salary request to an arbitrator, explaining in their submissions why the arbitrator should find an award in their favour.

To make the competition as close to the real NHL arbitration experience as possible based on the rules and regulation of the league’s Collective Bargaining Agreement, competitors also present their arguments orally to some of the most well-versed professionals in the industry, who then determine whether to side for the Player or Club.

Some of this year’s judges included the likes of Laurence Gilman, Assistant GM of the Toronto Maple Leafs, Clifford Hart of Borden Ladner Gervais LLP, as well as André Nowakowski and Dan Rabinowitz of Miller Thomson LLP.

Out of the 26 teams, Osgoode’s two teams excelled at the competition, and we ended up taking home the trophy for the first time in school history!

Both teams won all three of their respective preliminary hearings and carried a 3-0 undefeated record into the quarter-finals with the eight  remaining teams. After each team won their quarter-final, the two Osgoode teams actually ended up facing off in the semis, where Kazan Baigrie and Wright came out on top, and would go on to win the whole thing.”