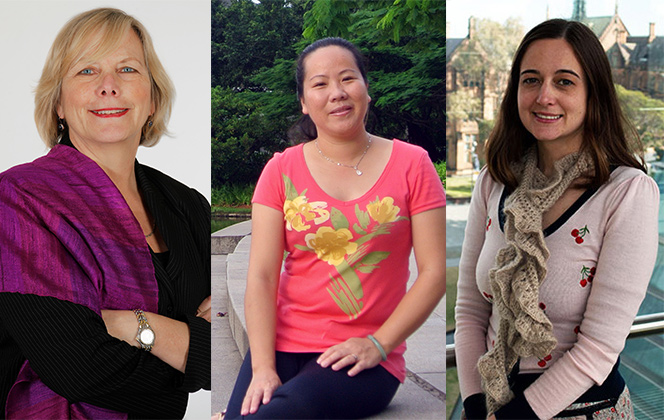 Susan Bazilli, Director International Women’s Rights Project, is a feminist lawyer, researcher, educator, and advocate who has worked globally on issues of women’s rights and human rights for the past 30 years. A graduate of Osgoode Hall Law School (LLB) and the University of British Columbia (LLM) she is based in Vancouver B.C. She is the author of the groundbreaking text Putting Women on the Agenda: Women, Law and the Constitution in Southern Africa. From 1992 to 1997, she was the Legal Director of METRAC , The Metropolitan Committee on Violence Against Women in Toronto, Canada, where she founded OWJNet, the Ontario Women’s Justice Network. In 1997, she was the start-up Executive Director of the California Alliance Against Domestic Violence. From 1998 to the present, she has been associated with the IWRP in Canada and internationally.

Chunjiao Yang is an Assistant Professor at Jimei University. She graduated from the School of Law, Xiamen University (PhD).  Her focus is on international taxation, and she is particularly interested in the tax treatment of financial instruments and transfer pricing.  She is the author of a study on income taxation of financial derivative instruments. In 2012, she was a Visiting Scholar at the National University of Kaohsiung in Taiwan. From 2014 to the present, she has been a part-time researcher at the Center for International Tax Law & Comparative Taxation, Xiamen University.

Linda Steele is a lecturer in the School of Law and a member of the Legal Intersections Research Centre, University of Wollongong, Australia. She holds a BA(Gender Studies) and LLB(Hons) from University of Wollongong, a Masters of Public and International Law from University of Melbourne and a PhD from University of Sydney. Steele’s research explores the intersections of disability, law and injustice. Her research is interdisciplinary, drawing on diverse critical theories and empirical research methods to provide new approaches to understanding and responding to contemporary disability law and policy issues. Her current research projects focus on: (1) punishment of people with disability, and (2) violence against people with disability. Steele has co-edited the following special issues: ‘Disability at the Peripheries: Legal Theory, Disability and Criminal Law’ (2014) Griffith Law Review and ‘Medical Bodies: Gender, Justice and Medicine’ (2016) Australian Feminist Studies, and is currently co-editing the following two special issues to be published in 2017: ‘Normalcy and Disability: Intersections Among Norms, Law, and Culture’ Continuum and ‘Disability, Rights and Law Reform in Australia – Recent Trends’ Law in Context. Steele is active in policy and law reform debates related to disability rights and her submissions and scholarship have been cited and used in domestic and international law reform contexts. Steele has been a board member of the Women in Prison Advocacy Network since 2008.