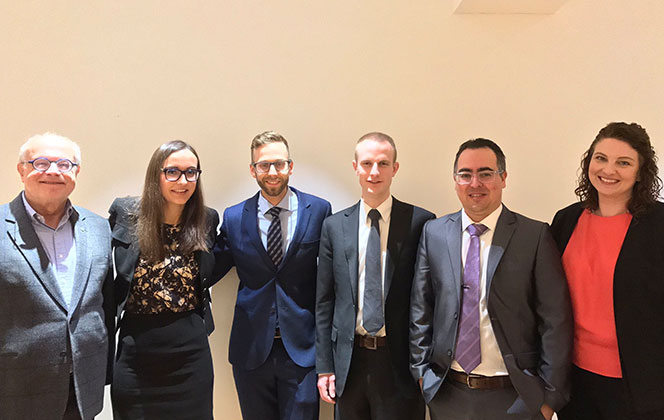 Nearly 60 law schools submitted facta to qualify for the competition. Osgoode was among the top 24 teams invited to participate in oral arguments, held at the oldest university in the English-speaking world: Oxford. Osgoode then placed first among all 24 teams participating in those oral rounds—thus winning the Allen & Overy award—and was one of eight teams to advance to the next round. The finalists – Bucerius Law School of Germany and University of Toronto – argued in front of the Supreme Court of Erehwon. After a heated debate, the panel of three highly esteemed IP experts – The Rt. Hon. Lord Justice Floyd, Mr. Justice Sir Birss and Judge Clarke – ruled for Bucerius.

The 2017 moot problem concerns a fictitious case, Whispering Gums Winery v Loddon River Vineyards, between two alcohol manufacturers from a fictitious country named “Erehwon.” The case raises several novel IP issues. Whispering Gums owns a patent on a bottle that enhances the effervescence of sparkling wines and sells a brand of local sparkling wine called “Wizard’s Wizz Erewine” that is contained in their patented bottle. The dispute is over Loddon River’s use of the mark “Erewine” for two of its products, a sweet apple cider and a non-alcoholic elderflower flavoured drink. Whispering Gums is accusing Loddon River of patent infringement and extended passing off of “Erewine,” while Loddon River argues that Whispering Gum’s patent is invalid on the grounds that it contravenes public policy or morality.

This report was submitted by Osgoode PhD candidate Aviv Gaon.