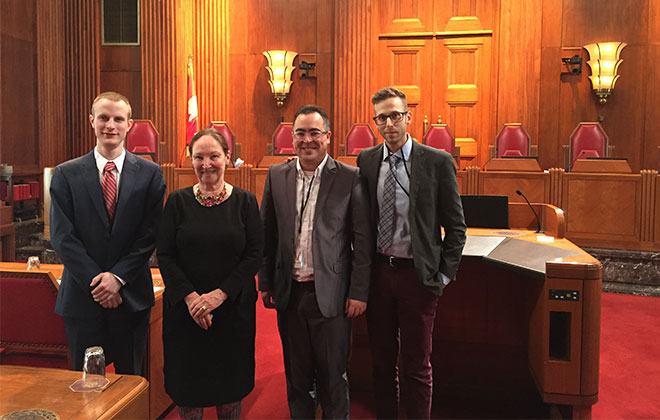 The moot is held annually at Oxford. Osgoode’s team qualified for the oral rounds for the third consecutive year. The 2017 moot problem concerns a fictitious case, Whispering Gums Winery v Loddon River Vineyards, between two alcohol manufacturers from a fictitious country named “Erehwon”. The case raises several novel IP issues. Whispering Gums owns a patent on a bottle that enhances the effervescence of sparkling wines and sells a brand of local sparkling wine called “Wizard’s Wizz Erewine” that is contained in their patented bottle. The dispute is over Loddon River’s use of the mark “Erewine” for two of its products, a sweet apple cider and a non-alcoholic elderflower flavoured drink. Whispering Gums is accusing Loddon River of patent infringement and extended passing off of “Erewine”, while Loddon River argues that Whispering Gum’s patent is invalid on the grounds that it contravenes public policy or morality.

IP Osgoode’s founder & director, Professor Pina D’Agostino said, “I am very proud of the accomplishments of the IP Osgoode team. In the past three years, we have managed to secure our place among the leading schools in the field of IP.”