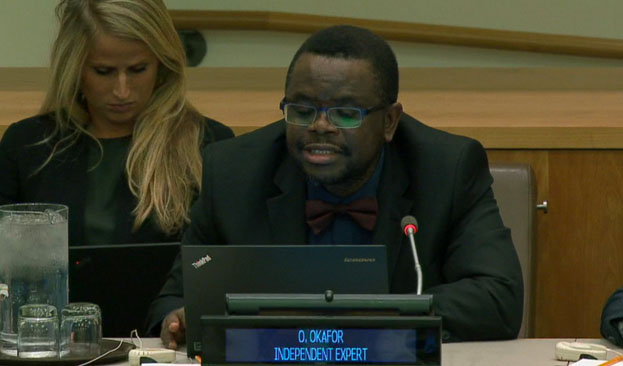 Professor Obiora Okafor addressed the 72nd session of the United Nations General Assembly for the first time on October 17, 2017 as the Independent Expert on Human Rights and International Solidarity whose mandate is to develop, promote and shepherd to adoption a draft declaration on the right of peoples and individuals to international solidarity.

Speaking on the Draft Declaration on the Right to International Solidarity, Okafor told the UN: “This document is the result of years of research and thoughtful consideration by those who have held this mandate before me, as well as significant input from States, civil society, and leading scholars. It is an extraordinary document, which presents a genuine practical tool for the expansion of international solidarity and human rights around the world, with the ultimate goal of realizing what was promised by the Universal Declaration of Human Rights: a social and international order in which all human rights and fundamental freedoms can be realized.”

Recognizing that resources are key to sustainable development, Okafor told the UN that the Draft Declaration builds on existing human rights law requiring states to mobilize resources for the realization of human rights, including through international cooperation and assistance, such as Article 2 of the International Covenant on Economic, Social and Cultural Rights, Article 4 of the Convention on the Rights of the Child, and Article 32 of the Convention on the Rights of Persons with Disabilities. In his statement, he emphasized the human rights-based international cooperation and an approach to international finance agreements that is consistent with human rights standards.

Okafor called on all States to incorporate the vision of the Draft Declaration in their efforts as they strive for the completion of the Sustainable Development Goals 2030 Agenda, in order to create a partnership that is truly global and development that is truly sustainable. By committing to prepare a road map, Okafor promised to assist States in the process of the adoption of the Draft Declaration by the Human Rights Council and by the General Assembly.