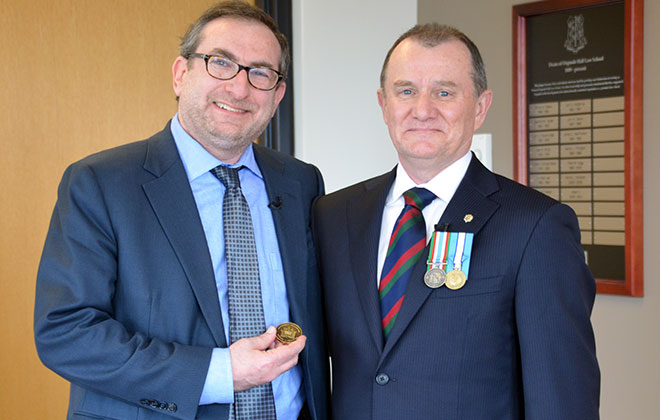 To commemorate the centennial this year of the Battle of Vimy Ridge, Art Linton ’12 of the Vimy Foundation presented Osgoode Dean Lorne Sossin ’92 with a Vimy Commemorative Coin on March 10 on behalf of the Law Society of Upper Canada.  View a VIDEO of the coin presentation.

Linton said the coin is “in remembrance of the service and leadership of the many Canadian law students, lawyers, and judges who served in WWI generally and at Vimy in particular.”

The 100th anniversary of the battle of Vimy Ridge is a defining event in the history of our nation, but also an important part of Canada 150 celebrations. A number of activities are planned in both France and Canada.

In April, Canadians will commemorate the uncommon service and sacrifice of the soldiers, sailors, and airmen who left their families and occupations to serve in WWI generally and at Vimy in particular. For the first time, in recognition of the remarkable service and leadership of Canada’s legal professionals, the Chief Justice of Canada and the Judge Advocate General of Canada are invited to participate formally in the Vimy Commemoration at the National Cenotaph in Ottawa.

“The idea is to get people to look back in history and understand what service in leadership meant to other people in other times,” Linton said.

In a document prepared by Linton, he cited several examples  of legal professionals who demonstrated leadership and service:

The most senior Canadian military officer ever to die in combat was Malcolm Mercer, a lawyer from Toronto who, in 1914, set aside his successful law practice to serve Canada in the early days of WWI. Major-General Mercer commanded the 3rd Canadian Division through the 2nd battle of Ypres and was later killed in action at Mount Sorrel. Mercer’s 3rd Division went on to write history at the battle of Vimy Ridge in April of 1917.

John Robert Cartwright completed his legal studies at Osgoode Hall in Toronto and had started his articles at a local law firm when he was called away to war. Although he enlisted as a private in the infantry, he was quickly promoted to lieutenant and then Captain. Cartwright was twice wounded and awarded the Military Cross for “courage in the face of the enemy”. When the war ended, he returned to complete his articles and to practise law. Captain Cartwright was appointed to the Supreme Court of Canada in 1949 and became the 12th Chief Justice of Canada in 1967.

Douglas Charles Abbott left his legal studies at McGill to serve with the McGill Battery of Siege Artillery, including at Vimy Ridge. After the war he completed his legal studies and was called to the bar in 1921. In 1940 he was elected to Parliament and towards the end of WWII he served as Minister of National Defence. In 1954, he was appointed to the Supreme Court of Canada.

Henry Grattan Nolan graduated from the University of Alberta and deferred a Rhodes Scholarship to serve in WWI. He was wounded at Cambrai and awarded the Military Cross. After the War, he earned a degree at Oxford and was called to both the English and Alberta bars. During WWII, he acted as deputy to the Judge Advocate General of Canada and later, he was the Canadian prosecutor before the International Military Tribunal trying war criminals in the Far East. In 1957 he became the first Albertan to be appointed to the Supreme Court of Canada.