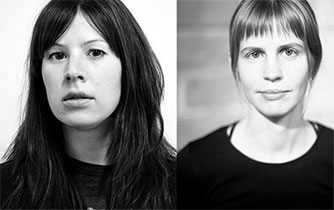 The creativity and talent of two former Artists in Residence Cindy Blažević (2013-14) (left) and Julie Lassonde (2014-15) were showcased at the Law School on Sept. 16. View photos.

Lassonde, a lawyer and performance artist, gave a 10-minute Counterbalance performance nvolving a 12-foot long seesaw made of steel and recycled wood as well as movement, the manipulation of objects and a sound recording. Lassonde will repeat her public performance on Sunday, Sept. 20 at 3 p.m. in the Law School’s Gowlings Hall.

Blažević, a Toronto-based visual artist, discussed her 600-square-foot installation of the photograph Colonialism, Continued 2013, that has been wrapped around the exterior of the Law School’s east-facing glass structure.

Blažević’s residency resulted in the photo-based artwork, Through a Prison System, Darkly: Criminal Justice Through the Lens of Kingston Penitentiary, which appears on kingpen.osgoode.yorku.ca. Her installation at Osgoode will be on exhibit until March 2016.