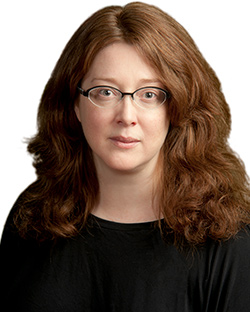 Professor Kate Sutherland joined Osgoode’s faculty in 1998, and has taught law at the University of Saskatchewan. She was Osgoode’s Assistant Dean, First Year from July 1, 2012 to July 1, 2015.  She has served as law clerk to Chief Justice Antonio Lamer of the Supreme Court of Canada, as well as Chief Justice E. D. Bayda of the Court of Appeal for Saskatchewan. Professor Sutherland is former Acting Director of the Centre for Constitutional Studies at the University of Alberta. She was the recipient of a Fulbright Fellowship in 1995 and the Law Society of Saskatchewan Gold Medal in 1989.  Professor Sutherland has written and presented in areas such as charter equality rights, sexual harassment, childhood sexual abuse, and tort law. She has served as editor or co-editor of several publications, including Review of Constitutional Studies, Constitutional Forum, Points of View, and Saskatchewan Law Review . Professor Sutherland has also written several literary pieces, including “The Necklace” in The New Quarterly , Winter (1997), Summer Reading: A Collection of Short Fiction (Saskatoon: Thistledown Press, 1995), and “Lucia” in Prairie Fire (1992).  Professor Sutherland’s community involvement has included her work for the Boston AIDS Care Project, University of Saskatchewan Women’s Centre, Her Story Calendar Collective, Saskatchewan Action Committee on the Status of Women, and the Saskatchewan Writers Guild.