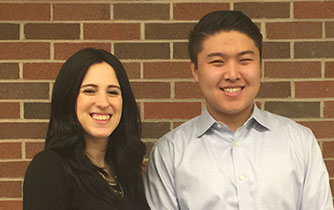 It’s not something you see every day, but JD students Osnat Nemetz ’16 and Michael Ding ’17 have won a case at the Tax Court of Canada.

The work they did on Shevchyk v The Queen was carried out through the Pro Bono Students Canada Tax Advocacy Project that partners with Dentons.

“We were responsible for two client case files, this one which was argued in front of the court,  and the second, which we settled favourably for our client out of court,” Nemetz said.

Shevchyk v The Queen was an appeal on the issue of whether the taxpayer was an eligible individual to receive Canadian Child Tax Benefits for his three children within the meaning of s. 122.6 of the Income Tax Act. The Tax Court of Canada found for the taxpayer and referred the case back to the Minister of National Revenue for reassessment on the basis that he was an eligible individual. The decision was released on March 29.

Nemetz and Ding are both students in Professor Jinyan Li’s International Tax course, and Tax of Wealth Transfers with Adjunct Professor Joseph Frankovic.