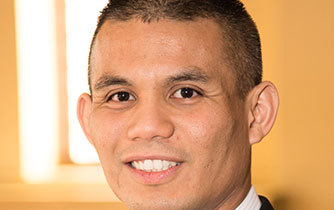 Saguil, who is Senior Counsel, TD Bank Group, graduated from Osgoode with a Bachelor of Laws (LLB) degree in 2007 and is currently a member of the Board of Directors of the Osgoode Hall Law School Alumni Association.

The Community Builder Award recognizes pro bono, community or corporate social responsibility efforts.  In a media release issued Friday, April 1, 2016, the CBA noted that “Mr. Saguil has demonstrated long-term commitment to a number of community programs and organizations, including the Law Society of Upper Canada’s Equity Advisory Group, of which Mr. Saguil was the Vice-Chair for three years before recently being elected Chair. Additionally, he serves on the Ontario Bar Association’s Council, Equality Committee, and as Chair of the Sexual Orientation and Gender Identity Conference. Mr. Saguil also has strong ties to the Federation of Asian Canadian Lawyers, where he served on the board and in executive roles. Mr. Saguil’s generous donation of his time, talent and energy is an inspiration to the Toronto legal community.”

The Community Builder Award was presented at the CCCA’s 2016 National Conference on Monday, April 4, 2016 in Calgary, along with the CCCA’s other awards.