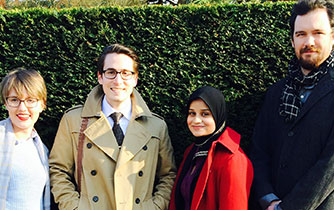 This year marked Osgoode’s debut at the Price Media Law Moot, in New York City at the end of January and at Oxford University from March 30 to April 2, 2016. Congratulations to Osgoode team members (pictured from left) Katya Bogdanov, Mike Maodus, Noorain Shethwala and Timon Sisic, and their coach, Professor Jamie Cameron.

The team reached the semi-finals at the Americas Round of the competition in New York City, where they won awards for the Best Memorial (Runner Up) and Best Oralist (Noorain Shethwala).

The International Round took place at Oxford University , where 40 teams from around the world competed. Osgoode mooted against teams from Belgium, Serbia, Australia, Egypt and Singapore.

The Osgoode team reached the octa-finals and quarter-finals of the competition before losing in a close round to Singapore Management University (which later won the championship).

Cameron reported that “the Osgoode team was highly praised and complimented for its mooting skills, not only by several panels of judges but also by their peers. Osgoode was warmly welcomed and earned great respect for its participation in the 2016 Price Media moot.”