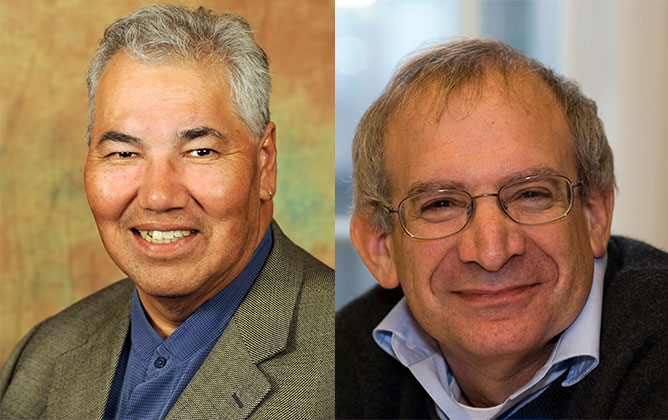 Justice Murray Sinclair (pictured on the left), Chair of the Truth and Reconciliation Commission of Canada, will receive an Honorary Doctorate as part of Osgoode’s Convocation ceremony on June 19, 2015, Osgoode Dean Lorne Sossin has announced.  The Law School also intends to confer an Honorary Doctorate on Justice Marc Rosenberg of the Ontario Court of Appeal. “Justice Rosenberg has been an enormously influential voice in the criminal justice community, with a long history of connections to Osgoode Hall Law School,” Sossin said. “Unfortunately, Justice Rosenberg has been ill in recent months, and it will not be possible for him to be on hand in June 2015 to receive this honour.”

Below are short biographies of the two individuals:

Justice Murray Sinclair LLB, DU, DCL was Manitoba’s first Aboriginal Judge. He was born north of Selkirk in what used to be St Peters Reserve. After graduating as the Valedictorian and Athlete of the Year from Selkirk Collegiate, Justice Sinclair served as a Special Assistant to the Attorney General of Manitoba. Shortly thereafter he attended the University of Winnipeg, graduating in 1979 from the Faculty of Law. He was called to the bar in 1980 after which he practised primarily in the areas of civil, criminal and Aboriginal law. In 1988, he was appointed Associate Chief Judge of the Provincial Court of Manitoba. In the same year he was appointed co-commissioner of the Aboriginal Justice Inquiry with Associate Chief Justice A.C. Hamilton. This seminal study resulted in close to 300 recommendations, which still impact our justice system today. Currently, Justice Sinclair is the Chair of the Truth and Reconciliation Commission of Canada, which is a part of Canada’s comprehensive response to the Indian Residential School legacy. The Commission informs all Canadians about what took place at residential schools and documents the truth of survivors, families and communities impacted by Indian Residential Schools. He is also an adjunct law professor at the University of Manitoba. In 1994 he was honoured with one of the first National Aboriginal Achievement Awards. He has also been awarded honorary degrees from several Canadian universities including Dalhousie University, the University of Manitoba and the University of Ottawa.

Justice Marc Rosenberg graduated with a BA from the University of Western Ontario in 1971 and an LLB from Osgoode Hall Law School in 1974. He was called to the Bar of Ontario in 1976 and practised almost exclusively criminal law. In 1995, he took a leave of absence from the firm Greenspan, Rosenberg and Buhr and joined the Ministry of the Attorney General as Assistant Deputy Attorney General, Public Law and Policy Division and Civil Law Division. In December 1995, he was appointed to the Court of Appeal for Ontario. Recently, he also served as a Judicial Associate with the National Judicial Institute. Justice Rosenberg has taught Evidence, Advanced Evidence, and Administration of Criminal Justice: The Role of the Attorney General at Osgoode and was Head of Section in Criminal Procedure for the Law Society of Upper Canada, Bar Admission Course. Justice Rosenberg has consulted on a number of important matters, including serving as a member of the Canadian Bar Association consultation group to the Law Reform Commission of Canada from 1982 to 1992 and consulting on the Marshall Inquiry in 1989 with respect to the role of the Attorney General and the role of the Crown Prosecutor. He has written many articles and papers mostly related to criminal law, evidence and the Canadian Charter of Rights and Freedoms.