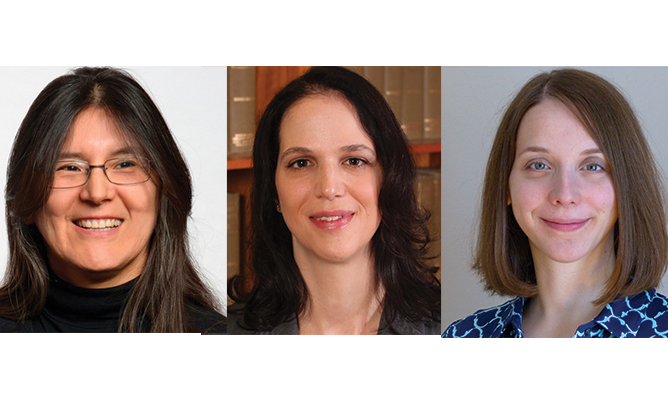 Osgoode Dean Lorne Sossin has announced the appointments of three new full-time faculty this year. Pictured, from left, are:

Deborah McGregor, PhD (University of Toronto) is Anishinaabe from Whitefish River First Nation, Ontario. Her research focus is on Indigenous knowledge in relation to the environment. More specifically, she has focused on Indigenous Knowledge Systems (IKS) and its various applications in diverse contexts including environmental governance, justice, forest policy and management, sustainable development and water governance. Her work has been published in an array of national and international journals and she has delivered numerous public and academic presentations relating to traditional knowledge and governance. She co-edited Indigenous Peoples and Autonomy: Insights for a Global Age (2010) with Mario Blaser, Ravi De Costa and William Coleman (2010). She will join Osgoode on July 1, 2015.

Lisa Dufraimont, JD (Toronto), LLM, JSD (Yale), previously served as an Associate Professor and Acting Associate Dean (Academic) at the Faculty of Law, Queen’s University. She was a law clerk to the Ontario Court of Appeal in 2001-02 and was called to the Bar of Ontario in 2003. Dufraimont teaches and conducts research on criminal law, procedure and evidence. Her scholarship has investigated the relationship between evidence law and the jury system, the psychological aspect of evidence rules, and the regulation of interrogation and confessions. Dufraimont has published numerous articles in leading Canadian law journals. She is co-author of Evidence: Principles and Problems, 10th ed., and Canadian Evidence in a Nutshell, 3rd ed.; Associate Editor of the Criminal Reports; and a regular contributor to the National Judicial Institute’s Criminal Essentials Eletter. She is also involved in a SSHRC-funded interdisciplinary research project investigating the effects of jury instructions on proof beyond a reasonable doubt. She will join Osgoode on July 1, 2015.

Palma Paciocco is currently an SJD candidate and a SSHRC doctoral fellow at Harvard Law School, where she is completing her dissertation on prosecutorial ethics and plea-bargaining. Before beginning her graduate studies, she served as a law clerk to the Honourable Justice Louise Charron of the Supreme Court of Canada. She holds a Joint Honours BA in philosophy and history from the McGill Faculty of Arts and a BCL/LLB from the McGill Faculty of Law. She is a member of the Law Society of Upper Canada and of the New York Bar. Her research and teaching interests include criminal law, criminal procedure, evidence, sentencing, professional ethics, and legal theory. She will join Osgoode on July 1, 2016.