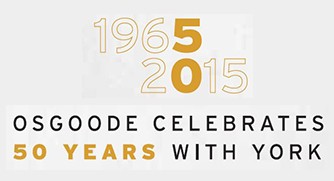 On Thursday, October 15, Osgoode Hall Law School and York University will mark the 50th anniversary of their affiliation.

To celebrate the golden anniversary, the Law School has set up a display in its main-floor Osgoode History & Archives Project space featuring artifacts from back in the day as well as a list of the Top 10 Reasons York Helped Make Osgoode Great.

In addition, members of the Osgoode community will be handing out 50th anniversary boxes of M&Ms on the 15th in Vari Hall in the Ross Building and Gowlings Hall in the Law School.

“Osgoode is proud to call York home,” said Dean Lorne Sossin. “Spending half a century as part of the country’s third largest university is a wonderful win-win. There are many ways in which Osgoode has contributed to York, but it is also true that the Law School is stronger because of the York community.”

“Osgoode Hall Law School’s 50-year association with York University has been a truly rewarding collaboration,” said Mamdouh Shoukri, President and Vice-Chancellor. “We are justly proud of Osgoode’s longstanding commitment to leadership, diversity and excellence in legal education. On behalf of all us at York, I congratulate Osgoode faculty, students, staff and alumni on this golden anniversary, and we look forward to our next 50 years together.”

Sossin said that the Law School is marking the 50th anniversary of Osgoode’s affiliation with York in 1965 with new interdisciplinary research initiatives as well as the announcement of a further $1 million investment in financial accessibility to ensure that a greater number of students are able to access legal education.

Half of the new funding ($500,000) will create 100 new $5,000 bursaries to be disbursed over two years. The balance of the new funding will go toward Osgoode’s first-in-Canada Income Contingent Loan Program, which provides a minimum of five students annually with bursary and loan funding to cover the entire cost of tuition for the three-year Juris Doctor (JD) program.

The Law Society of Upper Canada (which previously housed Osgoode Hall Law School) and York University signed an “affiliation agreement” to bring Osgoode to York on October 15, 1965. York also finalized plans that year to construct a new building and library for the School. The Law School, which was founded in 1889, moved from Osgoode Hall – a landmark building in downtown Toronto that now houses the Ontario Court of Appeal, the Divisional Court of the Superior Court of Justice, and the Law Society of Upper Canada – to York upon the completion of the building in 1969.