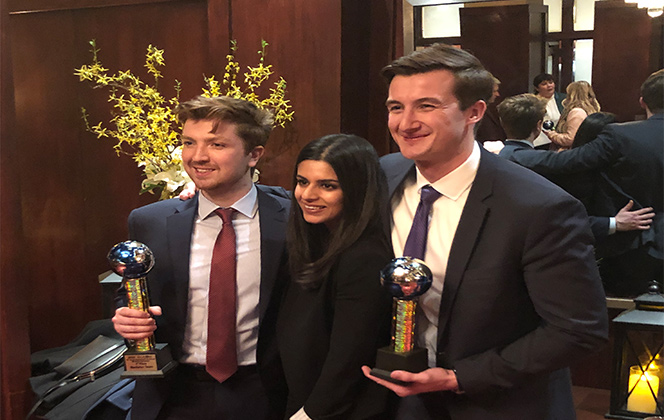 Firstly, at the Canadian National Negotiation Competition at the University of New Brunswick in Fredericton, Osgoode’s team of Alina Butt and Abiramy Uthirakumaran placed first, winning the entire competition. They will be moving on to internationals this summer in Montana. Osgoode’s other team of Kaliopi Dimitrakoudi and Jonathan Wallace are also to be congratulated on their performance.

Secondly, at the International Academy of Dispute Resolution 19th Annual International Law School Mediation Tournament at Loyola University Chicago School of Law, the Osgoode team of Robert MacKenzie, Karen Mann and Adam Voorberg (pictured) turned in an impressive performance, winning their room in the finals as mediator and placing second overall in the competition. The two teams (including Osgoode’s second team of Jessie Armour, Joshua Harriott and Jared Toll) also placed and received individual awards for client-advocate and mediator in the preliminary rounds.

“These three examples point to a flourishing ADR program at Osgoode, and we are really happy that students are engaging with the principles of dispute resolution in such a skillful way,” Bevilacqua said.