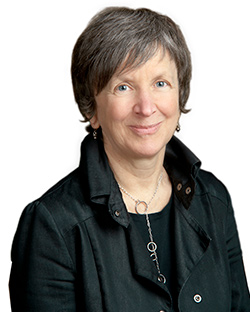 Professor Mosher joined the faculty of Osgoode Hall Law School in 2001 after teaching at the Faculties of Law and Social Work at the University of Toronto, where she was also the Director of the Combined LLB/MSW program. Between 2001 to 2005 and 2011 to 2013 she was the Academic Director of Osgoode’s Intensive Program in Poverty Law at Parkdale Community Legal Services. Professor Mosher is currently editor-in-chief of Osgoode’s Journal of Law and Social Policy and has served as the English language editor of the Canadian Journal of Women and the Law.

Recent Publications:
Take the Story, Take the Needs, and DO Something: Grassroots Women’s Priorities for Community-Based Participatory Research and Action on Homelessness (2012) (co-author)
Constructing Crime: Contemporary Processes of Criminalization (2010) (co-editor)
No Cherries Grow On Our Trees: A Brief by the Take Action Project, A Public Policy Initiative to Address Women’s Poverty and Violence Against Women (2008) (lead author)
“Accessing justice amid threats of contagion,” (2014) OHLJ
“Human Capital and the Post-scripting of Women’s Poverty,” in Beth Goldblatt and Lucie Lamarche (eds.), Women’s Rights to Social Security and Social Protection (2014)
“The Construction of “Welfare Fraud” and the Wielding of the State’s Iron Fist,” in Elizabeth Comack (ed.) Locating Law: Race, Class and Gender Connections (3rd ed.) (2014)
“From Research to Acton: Four theories and their implications for knowledge mobilization,” (2014) Scholarly and Research Communication (lead author)

Graduate Research Supervision (LLM, PhD): Professor Mosher is particularly interested in supervising projects related to how law is implicated in gender-based violence; community-grounded conceptions of access to justice; law and social change; and poverty law. She welcomes qualitative projects, including those deploying community-based participatory action methodologies. Her current research grants include domestic violence and access to justice at the intersections of various areas of law and legal processes (family, child welfare, criminal, immigration, etc) and the criminalization of women victims of domestic violence.

Professor Mosher is willing to read preliminary proposals from strong students in the areas of interest listed, and comment on interest in supervision prior to submission of an official application.